Guest post by The Law Offices of Randolph Morgan III.

Money is always part of divorce, no matter how much money you make. For those of us not in the celebrity headlines, there is a sense of scarcity about the money.

While this scarcity may be factual, it’s often a reaction based on fear of the future. How will I pay the rent or mortgage? How will I live? This leads people to try to get as much of the assets as they can instead of as much they need. Soon, the focus is solely on the money instead of on all the solutions that can make a divorce as “easy” as possible.

Show Me the Money

That laser focus often turns money into a proxy for other things. For some the lion’s share becomes recognition from the ex, a way to acknowledge who was the better half in the marriage or for years of sacrifice. It’s often used as punishment. As in, “She cheated on me, so I’m going to get everything.” Money can also be used as apology from one spouse to another for wrongs or perceived wrongs.

Unfortunately, this attitude costs more money by delaying solutions and taking up time. Lawyers and advisers bill by the hour. Are you willing to waste more of the money you’re fighting over? As you go through divorce, are you approaching it with a “I want it all” attitude? If so, ask yourself why. Do you feel you “deserve” it? Or are you truly concerned about making ends meet?

Money is Not a Cure 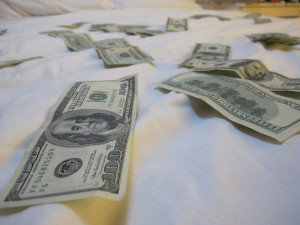 Using money to assuage emotions — deep hurt, resentment, rejection, betrayal, guilt — is like using a Band-Aid for a headache. It’s the wrong solution for your problem. Clients often end up wondering why they still feel crummy even after “winning” in the divorce. Very often they feel their spouse never “got it.”

Divorce leaves no winners. No matter what happens, you and the person you promised to love until death do you part are splitting up. Your lives are now on separate paths and you must forge on ahead. Even if it’s for the best, it’s still hurts, and it’s still a big change.

Of course anyone going through divorce should take stock of his or her financial needs and legal options. But rather than using money as a weapon, focus on which of your needs can be met with money, and which cannot. Once the money is settled, you can focus on meeting your other needs and finding happiness as you walk down a new path.